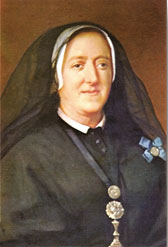 Maria Micaela Desmaisières y Lopez de Dicastillo was born in Madrid, Spain, on January 1, 1809. Her father was a high ranking Officer in the Spanish Army and her mother was Lady-in-waiting of the then Spanish Queen, Maria Luisa de Parma. Micaela was the 5th of the 10 children born to the couple. At the age of 13, Micaela lost her father; however, her mother did not fail to bring up the children in true Christian faith

From her childhood Maria Micaela was very fond of spending time before the Blessed Sacrament and of helping the poor and needy. She had the whole-hearted approval and support of her mother in this. In her Autobiography we read that, when her Ayah took her out for evening walks, she used to bribe her and spend that time in a church. Although she was very pious and kind-hearted, her life unfolded in the high circles of the Spanish and French Nobility. Her brother Diego was the Spanish Ambassador to France and Belgium. So young Micaela spent a lot of her time in the Royal Palaces of Spain, France and Belgium, attending Royal parties, dances and other gatherings. She had a very cordial relationship with the Monarchs of these countries. Dances, parties, Social gatherings, horse rides were the order of the day for her, although she did not neglect her charitable works. She wrote in the Autobiography that the mornings were spent for God, in prayer and charitable works, and the evenings in worldly enjoyments.

It was at the age of 35 that her eyes were opened to the painful realities of life. Young Micaela was taken to the St John of God Hospital in Madrid by a friend of hers, Lady Ignacia Rico de Grande, who was advised by her confessor – Fr Eduardo Jose de Carasa, SJ, who will eventually become Micaela’s spiritual director. In this Hospital, while visiting the wards of patients with sexually transmitted diseases, she took note of a particular young girl, who had a luxurious and expensive Cashmere Shawl on her bed. It called the attention of Micaela, because she herself had purchased a similar one around that time in Paris for her sister-in-law and knew very well its value. “If only you had the money that cost you to buy this shawl!…” “I brought this from my home!” This was the beginning of an encounter that brought to light the pathetic story of that only daughter of a Banker, who became a victim of prostitution through deception. For the first time, Micaela came face to face with a reality until then she was unaware of: the painful plight of such girls and women. The story of this girl and those of many others made Micaela convince herself that something has to be done for the moral and social rehabilitation and liberation of socially marginalized young women, especially of the victims of prostitution and sexual abuse.

With the help her friend, Lady Ignacia Rico de Grande, she opened a Shelter Home – Centre of Our Lady of the Forsaken – on April 21, 1845, at No.8, Dos Amigos Street, Madrid. Here at this Centre, these girls would remain for a period of time, in order to be rehabilitated before God and Society.

Since Micaela had to accompany her brother and family to France and Belgium, she entrusted the Centre to a Committee of pious Noble Ladies. They looked after the girls for some time, but at the end she realized that the effort was a failure. Then she looked for a Religious Order to take charge of the Centre; the outcome was still worse. Micaela also tried her hand at employing teachers to look after these girls. However, nothing produced positive results. Finally, one night, while in prayer, the Lord made her understand very distinctly: It is YOU I want in my work. All these efforts caused her a lot of suffering, unpleasant moments and criticism from family members and even the Clergy in general.

However, despite all odds and opposition from family and friends, in 1850, she left her home to look after the unwanted of society, living with them. Accustomed to a luxurious life, this new experience was very painful, however, her love for Jesus whom she saw in those unfortunate victims of sexual exploitation, enabled her to go forward courageously. Love for Christ in the Eucharist was the soul of her work.

In order to give continuity to this work, Maria Micaela – under the name of Mother Sacramento – founded the Congregation of Ladies Adorers Handmaids of the Blessed Sacrament and of Charity, in 1856. She made her religious profession with a group of 7 companions. Soon the work began to spread all over Spain. By 1865, there were 7 Houses of Sisters Adorers where over a thousand young girls were being rehabilitated or protected from the clutches of prostitution. Several other Houses were in the process of opening, as requests were pouring in for more and more Centres of this sort. Hundreds of young girls joined the Congregation attracted by the Charism: Eucharistic Adoration and Liberation of marginalized girls and women.

In 1865, Spain was ravaged by Cholera epidemic. The town of Valencia was most affected and Mother Sacramento had a House there. Hearing of the news, she rushed there to assist the sisters and girls, despite objections from friends and well-wishers and the tearful pleas of her sisters and girls in Madrid. True to her desire to become a Martyr of Charity, soon after her arrival in Valencia, while attending the cholera patients, she herself became a victim of the epidemic and died on August 25, 1865, at the age of 56. Pope Pius XI, who canonized her on March 4, 1934, in his homily hailed St Maria Micaela of the Most Holy Sacrament a Martyr of Charity.